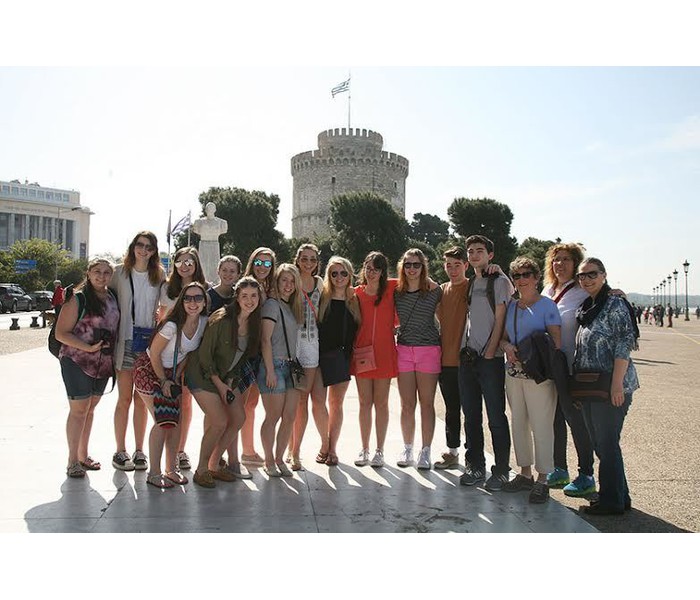 Thessaloniki, founded by King Cassander, who named it after his wife and Alexander’s the Great sister, stands, since 315 BC, on the northern fringe of the Thermaic Gulf, proud of its rich history and Cultural identity. On Sunday the 10th of April, Pinewood’s CHRHS guests had an introductory tour of their host city.

We started with a Boat Tour along the harbor front, enjoying a spectacular view of Thessaloniki. This proved to be a great opportunity to see the city from a different perspective and get some great photographs.

We continued with a walking tour of the city focusing on the stories that hide behind the major monuments, the busy streets and the traditional neighbourhoods. History, art, architecture, flavours and aromas were our stepping stones of experiencing the culture of Thessaloniki.

Visiting the Galerian Palatial Complex, an absolute must, was our principal goal. Built at the turning-point of two worlds, the Roman and the Byzantine, it is the city’s most important architectural development. Its erection began in the late 3rd century-
early 4th century AD, when the Caesar Galerius Valerianus Maximianus Galerius (260-311) chose Thessaloniki as the seat of the eastern part of the Roman Empire.
ignificant building remains of the Palatial Complex, the Rotunda and the Triumphal Arch marked Thessaloniki’s landscape since their early construction. Many more came to light in excavations carried out during the second half of the 20th century.

We visited them all, and our visitors seemed truly impressed. Our city tour ended in the Ladadika area, the city’s centre of wholesale trade. The Ladadika quarter was named from the wholesale trade of oil and was spared from the devastating fire of 1917, retaining the character and memories of the late-19th century market. Different types of buildings and styles compose an image of the city’s architecture and street planning out of the past. Today, the area remains vibrant, as it is home to numerous offices, restaurants and cafés. We chose Tiganies kai Sxares and our day ended in a typical Thessalonian style, around a table with good food.