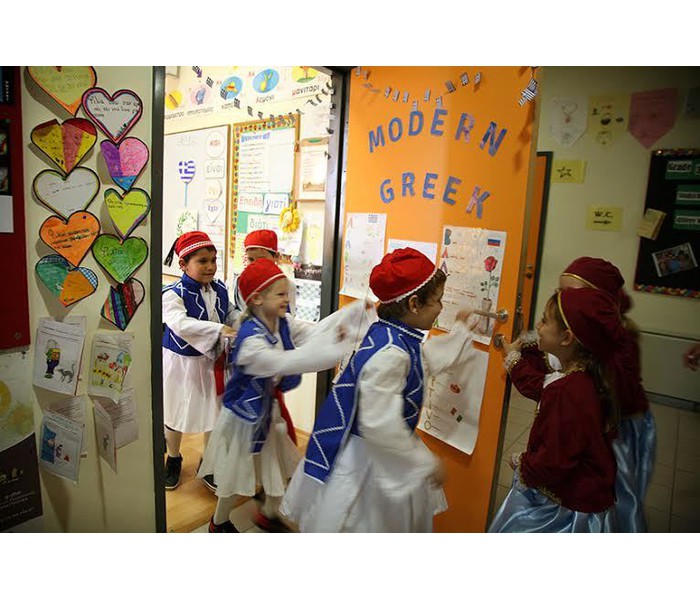 On Thursday March 24th we held our Annual Celebration for the 1821 Greek Revolution. March 25th 1821 commemorates the day that the Greek Insurrection for independence begun against the Ottomans.
All of our elementary, grade 6, 7&8 students were involved in the preparation of the whole celebration. Through interactive activities, like painting, dancing, singing and watching videos children had the opportunity to learn about this important period of Greek history and familiarize with many traditional cultural elements.
First grade students dressed in traditional Greek costumes danced the Greek traditional dance: ‘Mana mou ta kleftopoula’. Also, they spoke about the Greek Revolution through poems. Second grade students spoke about the meaning of “motherland” (patrida) and sang the traditional song: ‘Αh! Patrida mou glikia’. Third grade students sang the traditional song: ‘To flabouro’ and spoke about what the Greek flag sympolizes. Fourth and fifth grade sang and danced the song ‘O Karaiskakis’ supported by live performances of piano, Dr. Smite, and bouzouki artist, Mr. Lagousis. Also, fourth and fifth graders sang the song: “Leuteria” (freedom) accompanied by various musical instruments.
Grade six students sang “Akathistos Hymn” in a very emotional way. Finally, since Mikis Theodorakis was the composer of the month, some selected students from grade 5, 7&8 sang the two famous songs: ‘Τis dikaiosinis ilie noite’ and ‘ Ena to helidoni’. Both of them are well known and translated in many languages.
All the students showed enthusiasm and worked hard during the rehearsals. The outcome of the whole celebration was a big success!
Congratulations to everyone!