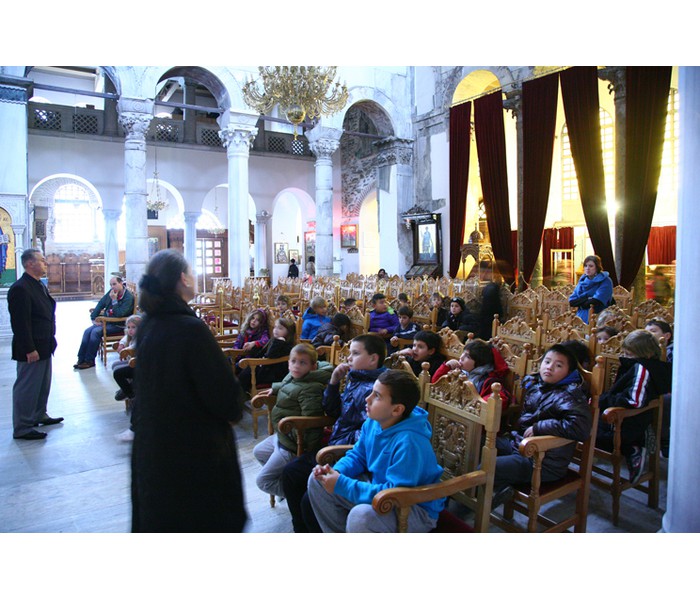 The Basilica of Saint Demetrios is one of the oldest, and by far one of the most venerable Byzantine churches in Thesaloniki. It was built to honour Demetrios, a young Roman citizen of senatorial class who was imprisoned and met his death as a Christian martyr during the persecutions of Galerius in 303 AD.

Few years after Demetrio’s death a small chapel was established on the site of his martyrdom, and in the 5th century, Leontios, an important provincial governor, had a large basilica constructed on the site, installing the tomb of the saint in a silver ciborium. This 5th century basilica was destroyed by the earthquake of 620 and the fire that followed it, to be rebuilt under the supervision of the Bishop of Thessaloniki and Leon, the Governor of the city.

Throughout the Byzantine period, the church of Saint Demetrios became the center of his cult, and the Demetria festival, the venue through which, each October, the people of the city and pilgrims from all over the Christian world, honoured their patron saint of Thessaloniki.

In 1493, the Ottomans converted the church into a mosque. It returned to Christian worship in 1912 when Thessaloniki was liberated by the Greek army. Unfortunately, in 1917 the church was destroyed once more by fire. The reconstruction and restoration of the church, which retained and incorporated those parts of the building that had survived the fire, were completed in 1949.

Our students were greatly impresses by the 7th century mosaic presenting Saint Demetrios with two children. A youthful Saint is depicted dressed in luxuriously patterned robes with the distinctive senatorial tavlion across his chest, resting a protective hand on the shoulder of the older child, who were probably saved through his intercessions.

The last place to visit during our trip was the Crypt, originally the Roman baths where, according to tradition, Dimitrios was imprisoned and executed back in the early 4th century AD. Our students loved the Crypt. They fully understood how special this place has been for hundreds of years. I believe they deeply felt its magical aura.