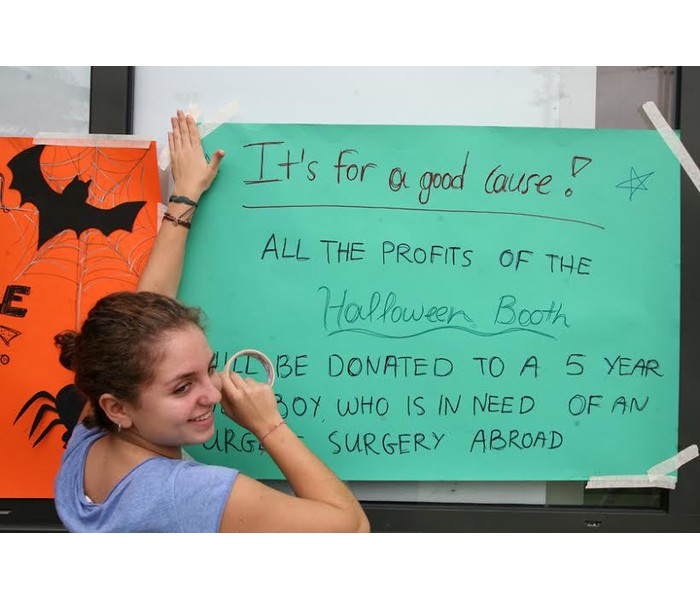 On Monday 19th of October we organized a Halloween Fundraising Bazaar. We sold Halloween decorations, accessories and themed sweets in order to get Pinewood in the Halloween spirit. All of the profit was contributed to a 5 year old boy with brain cancer that needs to be operated abroad (also both of his parents are unemployed). Special thanks goes to Mirela Chatziantoniou, Kalina Dimitrova, Anna Gjoleka, Inna Gjoleka and Sofia Nikolaidou for setting up and organizing the Bazaar. I would also like to thank Ms. Niki for coming up with the idea and helping to set up the booth and Ms. Pagidou for supporting our project.  The amount of money that we raised covers only a very small fraction of the expenses of the surgery. However, the family will appreciate it because it’s not only the matter of money but also the moral support. Right now these parents need, more than anything else, the moral strength to fight through this struggle and emerge as winners. Therefore with projects such as this and the one that Fay Diamantopoulou initiated, they know that there are some people out there that have supported them and care about them and I truly believe that we managed to put a smile on their faces which is priceless. Our thoughts and love will continuously be with them.   At these difficult times the least that we can do is support each other and show sensitivity to such matters. That’s why I would also like to thank everyone who contributed to the Bazaar. We look forward to organizing other projects in the future in order to raise more money for this very important cause.    On behalf of the Pinewood 11th Grade,Eleni Omiridou