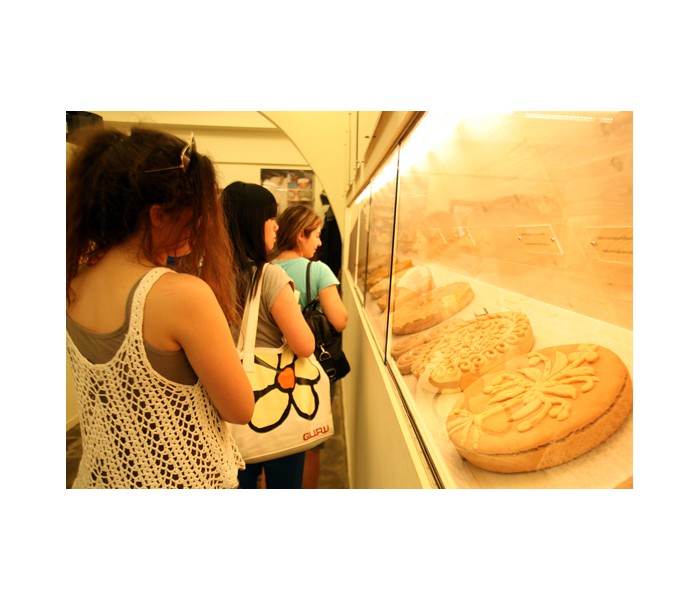 Many years back, Zeus, the formidable king of ancient Greek gods, released two eagles in opposite directions.  They met in the sky above Delphi, marking the area as the center of the world. Our trip to Delphi was so full and culturally rich, it was like visiting in just three days, paradise.

On our way to Delphi we first stopped at Thermopylae to visit the modern monument for the famous battle of 480 BC, and the local Historical Center to see an interesting 3D documentary on the same subject. Our next stop was the picturesque village of Amfiklia where we visited a very unique Museum  dedicated to Bread. The Amfiklia “Bread Museum” is a small, delightful place where the visitor can really understand the prominent role of Bread in Greek social and religious life. We will all remember the rich exhibition of a variety of breads in different sizes, shapes and intricate designs.

Friday morning was dedicated to Delphi, its antiquities, and the Ideals it represents. We visited three important areas within the Delphi vicinity: the Angelos and Eva Sikelianos Museum, the Delphi Archaeological site, and the Archaeological Museum.

Our advice to all Delphi visitors is to start their day with the Sikelianos Museum. The quaint stone-and-brick Sikelianos home is situated on the highest part of Delphi village, mastering a breath-taking view of the Corinthian gulf. It is now a museum commemorating the work of the eccentric 20th-century Greek poet Sikelianos and his equally eccentric American wife, Eva Palmer.  Few tourists visit this elegant place, which commemorates the poet’s attempt to revive the Pythian Games back in the 1920s, and the fine collection of Eva Sikelianos-designed costumes for the Greek tragedies performed during the Pythian festivities.

The rest of the day was really unique as unique is the Greek countryside. We spent the afternoon visiting  the most famous Parnassus mountain village of Arachova, and we had dinner by the sea at Itea, a beautiful harbor-city on the Corinthian Gulf.

On our way back to Thessaloniki we visited the Monastery of Hosios Lukas, one of the finest Byzantine monuments in Greece. The Monastery, set on the western foothills of Mount Helikon it is famous for its Katholikon (the main church of the Monastery) decorated with rare marble revetments and astonishing mosaics. We found however, equally interesting and aesthetically appealing the cloisonne masonry of the smaller church of the Theotokos.

Read below student impressions of the trip to Delphi:

Delphi is probably one of the quietest places I have visited in Greece: the village is very small and seems to be lost in the middle of the mountains. From our hotel, some of us had a view of the sea and the rest of the village. Delphi is a very calm place; the village has a few taverns, a school and a few markets. Our first day in Delphi was very relaxing after a long ride on the bus; however, the second day was much busier. We first visited the house of a very famous Greek poet, Angelos Sikelianos (1884 -1951). Later, we took the bus and visited the famous archeological site of Delphi. While there, we experienced the very well preserved Athenian Treasury, which was built to commemorate the Battle of Marathon. Then we saw the remains of the temple of Apollo, a Doric styled temple which was occupied by a mysterious oracle known as Pythia. Next, we visited the theatre, which was one the most impressive remaining structures of the sanctuary: the theatre gave a view of the whole sanctuary to the approximately five thousand spectators it could hold. Finally, we explored the Delphi museum, which housed many impressive artifacts; the most spectacular ones for size were the identical statues of Kleobis and Biton and the Naxian Sphynx, and for their quality of preservation was the bronze charioteer and the statue Antinous. The museum also holds many other striking gold artifacts and remnants which showed the richness of this area. Delphi is a deeply spiritual place, which arouses very calm yet captivating emotions. This is probably due to the density of the natural landscape, the relaxing feeling you gain from the tranquility of the village, and the archeological richness the area has to offer.

All in all, Delphi is a must-go site; it is in fact classified as a UNESCO World Heritage Site.