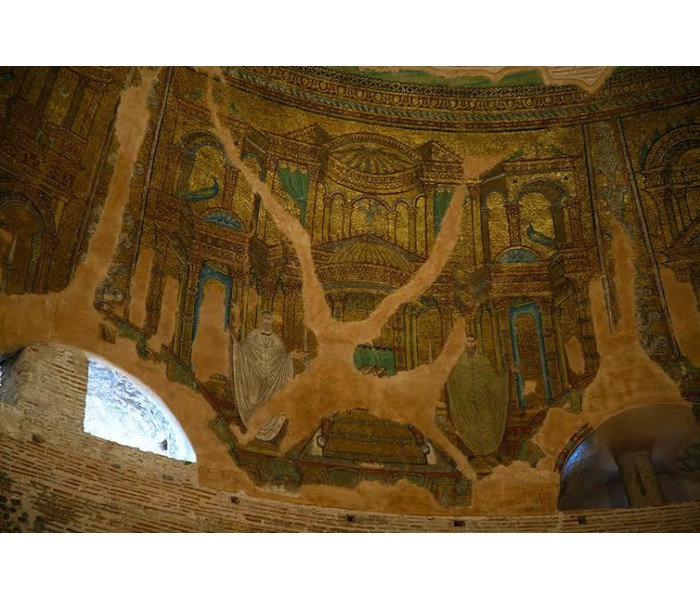 Around 300 AD Galerius, Ceasar of the Eastern Roman Empire, decided to establish his official residence in the city of Thessaloniki. He was an ambitious and powerful man, who decided to erect for his family and administration a magnificent Palatial Complex on the eastern part of Egnatia Street in Thessaloniki. The buildings that were part of his complex include the Rotunda, the Triumphant Arch, and the Royal Palace.

Thessaloniki, thanks to Galerius’ building program, became a splendid city, one of the most impressive in the Roman Empire. The Rotunda and the Triumphant Arch are very well preserved, our Pinewood students visited both of them.

We first visited the Rotonda, the impressive circular building, intended to be Galerius’ mausoleum or a temple dedicated to all Gods, something like the Pantheon in Rome. During the reign of Emperor Theodosius, the Rotonda, a Christian church by then, was beautifully decorated with breathtaking mosaics. The Turks transformed it into a mosque and much restoration was needed in order to convert it back into a Christian church and one of the most important monuments of Thessaloniki .

The Triumphal Arch was erected around 300 AD to remind the people of the Roman Empire, Galerius’ military successes in Armenia and Persia. The Arch was beautifully decorated with relief sculptures depicting the victorious campaigns in the East. One of the best scenes depicts Emperors Diocletian and Galerius sacrificing to the Gods, thanking them for the victory of 297. The Arch is unique in regards to its wealth of representations in relief decoration.