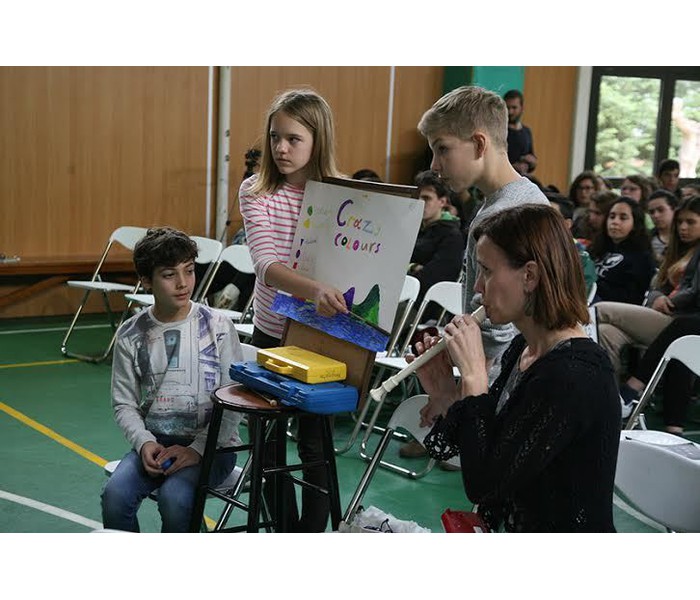 The seminar period on Wednesday, March 23 was dedicated to Wassily Kandinsky, focusing on how he has been inspired by music when creating his abstract paintings and the concept of abstract music. Students in grade 6 have prepared a wonderful presentation and performance for all secondary students, under the guidance of their visual arts teacher, Mrs. Konstantina Kapanidou and their music teacher, Ms. Gundega Smite.

Initially, the students have explained how Wassily Kandinsky’s work has been influenced by music and the link between color and shape in a painting and music or sound in a musical composition. The abstract music composed by Arnold Schoenberg at the beginning of the 20th century was the initial inspiration for the students. This music is missing a concrete melody and rhythm, but it is highly atmospheric and is focusing on sound itself. The music class students highlighted how shapes and colors can be linked with specific characteristics of a musical tone, such as pitch, duration and intensity. Students then played different instruments live on stage, demonstrating the idea of how colored shapes can be converted to musical tones in practice. The idea of abstract music, which can be created based on different sequences of shapes and color, was introduced and the audience was asked to actively participate in the creation of such a musical piece. A colored shape and an associated sound was assigned to each grade level in the audience and the students, playing the role of musical instruments, were asked to produce the sound, when their shape appeared on the projection screen. All students participated enthusiastically in this abstract music composition while Mrs. Kapanidou was changing the shapes on the projection screen and Ms. Smite was using hand gestures to change the intensity of the sounds produced by the students in the audience. Congratulations to all grade 6 students and their teachers who prepared this creative, engaging and thought-provoking activity that provided an insight on how connections may exist even between subject areas that do not necessarily appear to be related to each other.

The performance was repeated on Monday, April 11 for Middle school parents and the visiting students from Camden Hills Regional High School and was equally successful.