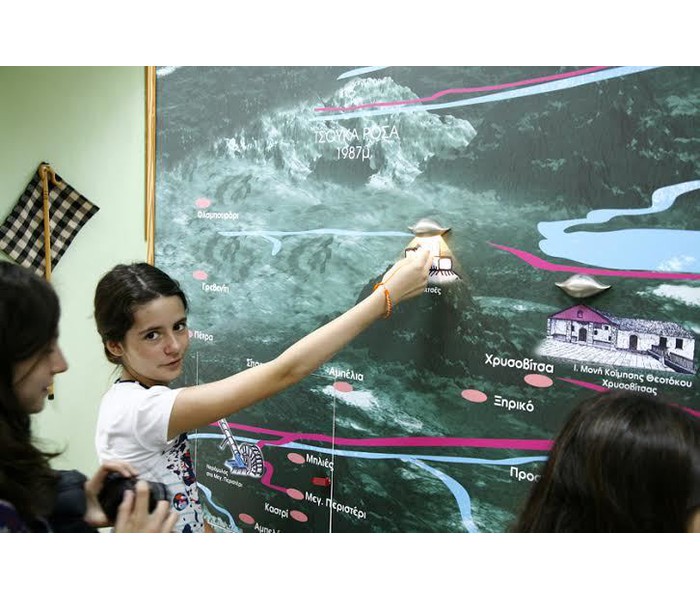 “Marvelous things happen to one in Greece – marvelous good things which can happen to one nowhere else. Somehow, almost as He were nodding, Greece still remains under the protection of the Creator. Men may go about their puny, ineffectual bewilderment, even in Greece, but God’s magic is still at work and, no matter what the race of man may do or try to do, Greece is still a sacred precinct – and my belief is it will remain so until the end of time.”
Henry Miller (The Colossus of Maroussi)

Even though most of you probably think of beaches when you think of Greece, exactly because this country has so many islands, you should also know that eighty percent of it is mountainous. Which means that there is so much to explore!

Metsovo is located in the Northwest, in the region of Epirus, fairly close to Ioannina. It is a very traditional town of mountainous Greece, truly worth visiting. I have been there in the past many times, but in May 22-23 I decided to introduce Metsove to our Middle School students. May is a wonderful time to visit Metsovo. Lush greens, crisp air and the typical Pindos mountain weather kept us constantly alert, enjoying every moment, grateful for the beauty of nature and the industry of man.

Our first day was dedicated to the protected area of North Pindos, because it uniquely combines natural and man-made environment. Metsovo is one of the many traditional Pindos villages that until today continues to be a pole of attraction supported by numerous religious and cultural monuments. Our Science teacher, Mrs Georgia Paliouris, organized for us to visit the Metsovo Information Center where the southeastern part of Northern Pindos National Park is presented. The exhibition is devoted to the Village of Metsovo and refers to the human activity in the area in both the past and present, as well as, the flora, the fauna, the mountains, the lakes, and the rivers of the region. Continuing our trip we also visited the artificial Lake of Aoos River. Manufactured back in 1987 in the Plateau of Politsies, the tour of the Lake gave us an opportunity to get in contact with the natural Pindos environment, relax, and enjoy the gorgeous landscape with the tops of Pindos unfolding around us.

One of the most picturesque cities in Greece is without any doubt Metsovo. Birthplace of many National Benefactors, Metsovo is famous for its great cultural development. So, Saturday morning was dedicated to visiting three Museums of the Tositsa-Averof Foundation.

We started with the Museum of Folkloric Art accommodated in the imposing Tositsa Mansion, where we discussed local architecture, but were also able to admire a large collection of woven textiles, local traditional costumes, jewelry, Byzantine Icons, arms and many other items that show the everyday life of Metsovo in the last century, which is preserved faithfully until today.

Visiting the Picture Gallery of Evangelos Averof is a Metsovo must. Its permanent exhibition comprises representative works by the major Greek painters, printmakers and sculptors of the 19th and 20th century, such as Gyzis, Lytras, Volanakis, Iakovides, Pantazis, Parthenis, Maleas, Galanis, Hadjikyriakos-Ghikas, Moralis, Tetsis, and many others. The museum’s Collection is regarded as one of the most complete and important of this period.