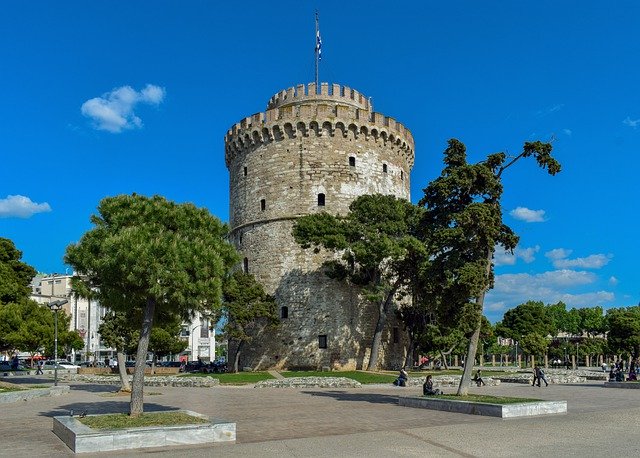 The White Tower is the emblem of Thessaloniki, proudly standing at the meeting point of the eastern wall and the sea wall. Originally the site of a Byzantine Tower, it was reconstructed in the late 15th century by the Ottomans, new rulers of the city, in their attempt to reinforce the city’s defense system.

The Tower’s history is closely linked to the city’s modern history. Originally known as Fort of Kalamaria, it was later known as Tower of the Janissaries and Tower of Blood (Kanli Kule), referring to the use of the building as a prison and a place of executions. Finally, in 1890, the tower was whitewashed by a Jewish convict in exchange for his freedom, and the name White Tower was introduced and used by the people of Thessaloniki.

Today, the White Tower serves as a Museum where visitors can enjoy a digital reconstruction of the city’s history.

Every year Pinewood Middle School students visit major Thessaloniki Museums in an attempt to better understand the city’s history and culture. Visiting the White Tower Museum was a unique museographic experience. Our students learnt about the 2300 years of Thessaloniki’s history through the use of new technologies. In the White Tower Museum historical information is presented mainly through impressive applications of image and sound, as well as touch screen multimedia applications, all harmonically combined with a limited number of archaeological objects displayed. As a result, our students had the chance to experience an intriguing trip in time from the day of the founding of Thessaloniki to its recent past, accompanied with the sounds, the special atmosphere, the spirit and the tastes of the city.