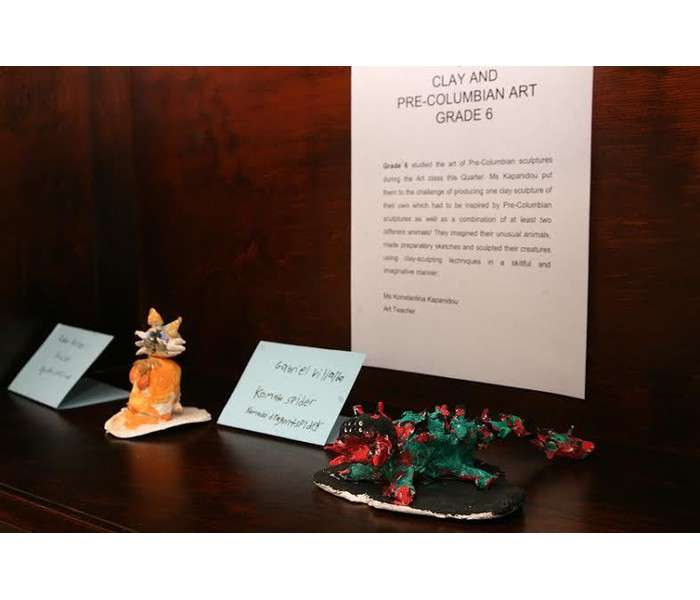 Grade 6 studied the art of Pre-Columbian sculptures during the Art class this Quarter. Ms Kapanidou put them to the challenge of producing one clay sculpture of their own which had to be inspired by Pre-Columbian sculptures as well as a combination of at least two different animals! They imagined their unusual animals, made preparatory sketches and sculpted their creatures using clay-sculpting techniques in a skillful and imaginative manner.

Grade 8 students explored the American artist Chuck Close (1940-) and his colourful grid paintings. Chuck Close is an artist who creates both photo-realistic paintings (look exactly like in real life) and semi-abstract grid paintings which look blurry when you look at them up close and become a clear picture when you look at them from a distance. In our class, we learned how to create a grid and patterns by adding one coloured shape inside the other in the style of Chuck Close. Using our school pictures we divided it in 4 main sections and coloured it in similar colours to create our own semi-abstract grid painting.

Chuck Close is globally renowned for reinvigorating the art of portrait painting from the late 1960s to the present day, an era when photography had been challenging painting’s former dominance in this area, and succeeding in steadily gaining critical appreciation as an artistic medium in its own right. Close emerged from the 1970s painting movement of Photorealism, also known as Super-Realism, but then moved well beyond its initially hyper-attentive rendering of a given subject to explore how methodical, system-driven portrait painting based on photography’s underlying processes (over its superficial visual appearances) could suggest a wide range of artistic and philosophical concepts. In addition, Close’s personal struggles with dyslexia and subsequently, partial paralysis, have suggested real-life parallels to his professional discipline, as though his methodical and yet also quite intuitive methods of painting are inseparable from his own daily reckoning with the body’s own vulnerable, material condition.

Photorealist painting of the 1970s celebrated the glossy, mirror-like “look” of the photograph, but after achieving that ideal, Close swiftly turned to portraiture, suggesting it as a means for exploring unsettling aspects of how self identity is always a composite and highly constructed, if not ultimately conflicted fiction.

Close’s dependence on the grid as a metaphor for his analytical processes, which suggest that the “whole” is rarely more (or less) than the sum of its parts, is a conceptual equivalent for the camera’s analytical, serial approach to any given subject. Every street-smart, colorful Polaroid is as much a time-based and fragmentary gesture as any more laborious stroke of the painter’s brush in the cloistered studio.

Close has worked with oil and acrylic painting, photography, mezzotint printing, and various additional media. Shifting confidently from one to the other, Close suggests that his conceptual intentions are ultimately timeless, whereas his tools or materials are infinitely interchangeable. This is partly why Close’s practice of portrait painting has for over forty years remained surprisingly “contemporary,” even while the larger movement of Photorealism, his earliest chosen stylistic idiom, has long receded into history.

Close’s slow, accumulative processes, which enlist numerous abstract color applications in the service of producing “realistic,” or illusory portraits, most recently finds application in the art of modern tapestry via a highly illusionistic, computer-aided method of industrial weaving that Close favors for its ability to suggest the hyper-real appearance of nineteenth century glass photographs(daguerreotypes).

Grade 10 students explored the Element of Art, Texture in all its qualities and ways used in Art. Texture can be tactile (what we can feel with our fingers) or visual (it made to look like it might feel rough for example, but the surface it’s painted on is actually smooth), as well as natural (found in nature) or artificial (made by humans).

Students were requested to create and name as many textures as possible using only white paper, white card, scissors and glue. We put them all together to create a very tactile, very white, very artificial Texture board!