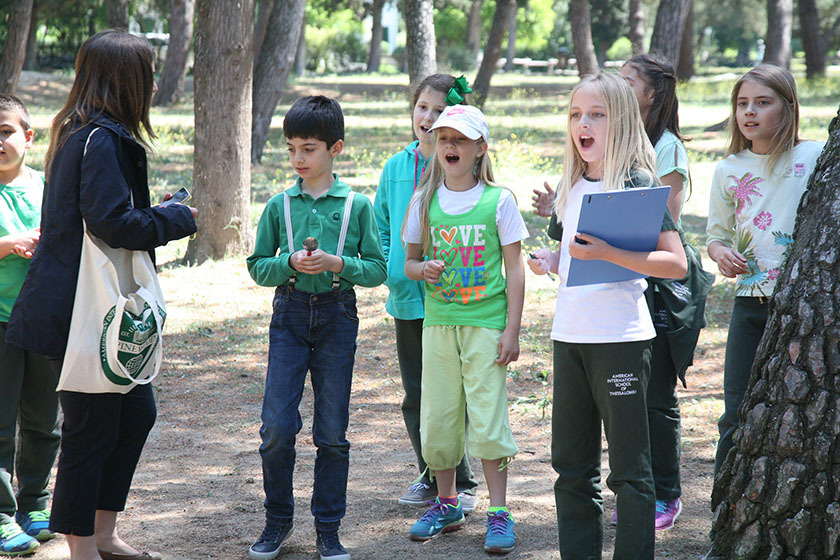 This summer, a team of our students visited Minsk, Belarus to participate in the International IYNT competition. This competition is held under the umbrella of the “Physics World Cup” and many countries around the world send their finest pupils to compete. Greece was accepted in this competition last year and this summer was the first time in IYNT for all Greek teams, including ours. I was the team leader in our team formed by Anna Arsenou (team captain), Phaedra Voulgari, Ricky Wang, Boris Katafygiotis, Ricky Lin and a student that we “borrowed” from another school, in order to form a team of six, Zacharoula Kigmiki.  This competition is addressed to students between the ages of 12-16. Each team has to work on 17 problems that are chosen by the IYNT scientific committee, design experiments to investigate these topics and evaluate the results.

There are three roles that the students are required to take during this tournament; reporter, opponent and reviewer. The reporter is a member of the team that presents one of the 17 topics. The opponent is a member of a second team, who tries to find weaknesses and limitations in the reporter’s presentation. The reviewer is a member of a third team, who acts as a judge, evaluating both the reporter and the opponent. All students (reporter, opponent and reviewer) present their case in front of the jurors, who grade them on their creativity, critical thinking and scientific knowledge. These roles rotate, so that every team acts on all roles. One “science fight”, involves all three teams acting on all three roles.

The first time I heard of this competition was last September, when I attended a workshop, held by the Hellenic Physics Society, aiming to introduce this competition to secondary teachers. I was very soon captivated by the design of the competition, since it was not a common tournament with scientific problems in the form of a test for students to solve. This competitions required speaking skills, one’s ability to defend an experiment in front of an audience, fast response to difficult questions, critical thinking and overall the ability to debate.

Our team worked hard over the last year in order to complete all 17 tasks and train on the different roles the students had to undertake. We went to Minsk with the hope that we would not be the worst team, since we had no experience and that we would be given the opportunity to show our good work, without “freezing” in front of the jurors, and without “blocking out” in front of the opponent. After the second day of the tournament it became obvious that we were doing well and our grades after each science fight were bringing us higher in the list of the 21 countries that participated. The students became more excited and soon we realized that we had a good chance of making it to the semifinals, which also meant winning the bronze medal. The day before the final “fight” was intense as we were devising strategies and refining our presentations.

After the final fight our total number of “wins” brought us to the semifinals. We won the bronze medal and came third in this amazing International tournament. I couldn’t be prouder of my students. It was an amazing journey for all of us, in which we met students and team leaders from other countries, exchanged ideas and made new friends.

Next year we will be going to IYNT with more experience and more passion. I encourage all students who want to work hard and gain new experiences to join the “Pinewood team” that is now being formed. Go Pinewood!!!