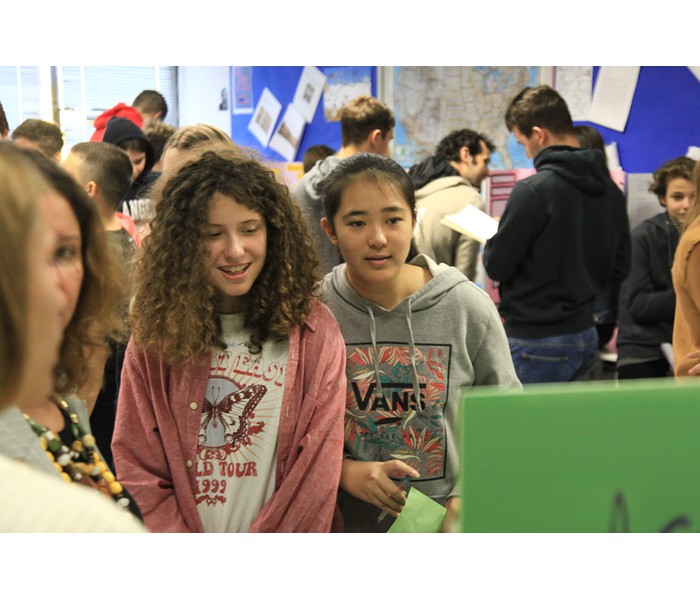 2019 has been designated as the International year of the Periodic Table by the United Nations, marking 150 years since Dimitry Mendeleev organized elements into the patterns we recognize today. Just as Mendeleev analysed experimental data our secondary students have been doing their own investigations and analysis over the past few months. Science Day is a very special day as it allows students to showcase their discoveries in poster presentations and practice sharing and explaining their findings with people of all ages. The wide interests of our students was clear in the variety of topics that had been chosen. Creativity and math skills were clearly visible in experimental or prototype design and the processing of data.

We are very proud to announce that the winners of Science Fair 2019 are:

Fotios Impas and Christos Kalemkeris (Middle School) for their project ‘Where do bacteria live?’

Anastasia Raicevic (High School) for her project ‘The Greenhouse Effect’

Following the awards; Professor Ioannis Refanidis, a specialist in artificial intelligence at the Computer Science Department at the University of Macedonia, gave the Keynote speech entitled “Modern Artificial Intelligence”. Professor Refanidis explained many of the current areas of research in computer science and students learned about a variety of applications, from the use of algorithms in medical diagnoses to the development of self driving cars.

Our I.B.1 Chemistry, Biology, Physics and Computer Science students were also busy in the run up to Science Day. They worked in multidisciplinary groups to research and collect data to investigate the question: Can zombies exist? Students then presented their findings to the whole of the secondary student body.

Pinewood Science Teachers would like to warmly thank everyone involved in this year’s Science Day and we look forward to Science Day 2020!