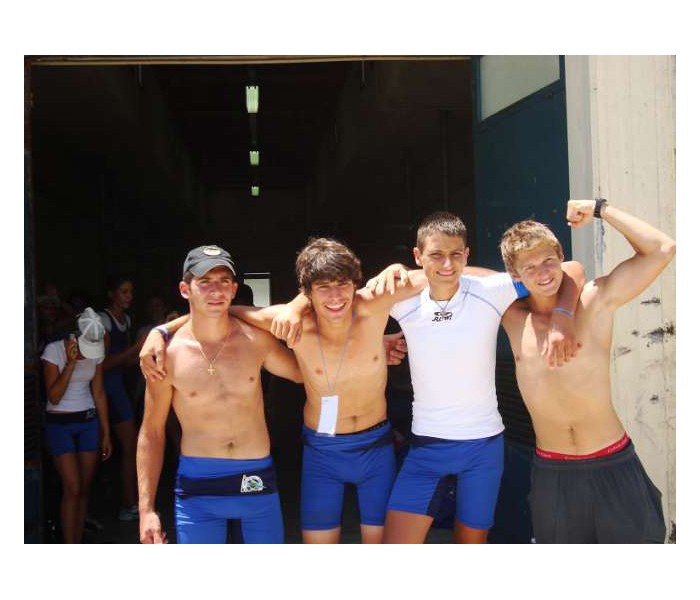 Marco started rowing less than a year ago, but after the first practice in the water, he knew he had found his athletic passion. He had always tried many sports, but none had felt right like crew. He was one of the most dedicated rowers on the team this past year and made fast progress, winning medals in early “friendly” regattas. Marco did so well that he was singled out to train with three other more experienced rowers at his club, Nautical Club of Thessaloniki, about four months before the national championships, as the coaches rightly saw great potential for the team of four. It was a grueling summer for Marco, as he was up at 6:00 am seven days a week to meet his boat mates, drive 45 minutes to a club on the river, practice in the heat for three to four hours and drive back. In late July, it all paid off when Marco and his boat mates won the national championship and broke the record for their division by an impressive 7 seconds. It was a major success for the guys and for the club. The race was so competitive that even the second place boat broke the previous Greek national record. Even at that, Marco’s boat beat the second place boat by 3 seconds, coming in at 6:28 for a 2-kilometer race.

Marco’s boat mates are currently trying out for the Greek national team, and their national championship is giving them a good edge (Marco does not have Greek citizenship and therefore is not eligible to try out for the national team here). As a boat, they have plans for many more races this year.

Marco had always wanted to try rowing, as his aunt was a crew team member at the University of Wisconsin – Madison, but it wasn’t until he was at an art exhibition with his Pinewood art class that he saw the club and took the step to check it out. This has been added to the many activities that Marco participates in. He has been a member of the Pinewood Band since its inception when he was in eighth grade, as the band’s bass player. He is a leader in Pinewood’s Model United Nations program, he’s an avid participant on Pinewood’s forensics team, and a broadcaster of an English language radio show every Wednesday on FM 100.6. Currently, Marco is also spearheading the organization of a fundraiser to raise money for a Habitat for Humanity project in Romania.

As if he is not busy enough, he has his own jewelry company and website, and he sells at street fairs and bazaars here in Greece and when visiting Chicago. The jewelry is hand-made from wire, beads and even shells or pebbles from local beaches. This summer, he planned jewelry-making workshops for a youth foundation in the Former Yugoslav Republic of Macedonia. These classes, teaching the kids how to make jewelry from everyday items, will take place this fall.

Even with so much going on, Marco is a top student, consistently on High Honor roll and many quarters on Director’s Honor Roll. He is a first-year IB student this year and plans to study engineering, possibly along with another major in a liberal arts department, at a U.S. university.

Congratulations to Marco for his ability to balance high-level athletic achievement with outstanding academic performance!