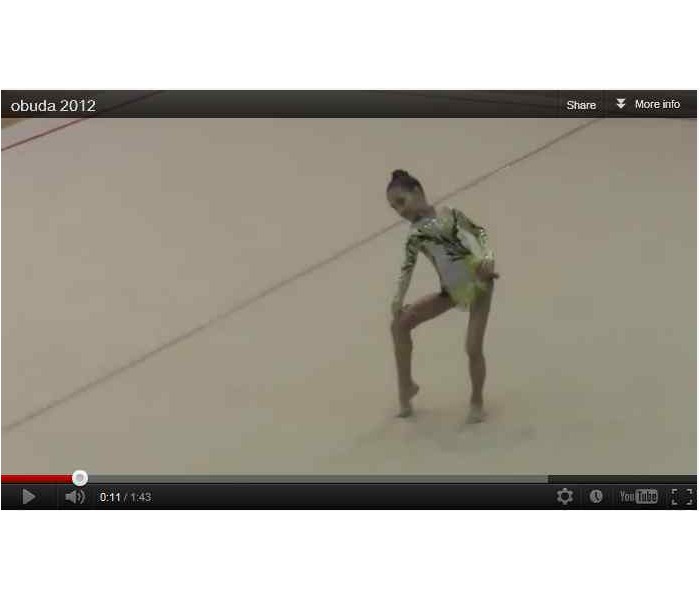 Theano started Rhythmic Gymnastics at the age of 4½ when she was in Kindergarten.  Rhythmic gymnastics is a sport in which individuals or teams of competitors (2 or more people) manipulate one or two pieces of apparatus: rope, clubs, hoop, ball, ribbon. There is also free, which includes no apparatus, and is called “floor routine”. An individual athlete only manipulates 1 apparatus at a time. Rhythmic gymnastics is a sport that combines elements of ballet, gymnastics, dance, and apparatus manipulation. The victor is the participant who earns the most points, determined by a panel of judges, for leaps, balances, pirouettes, flexibilities, apparatus handling, execution, and artistic effect.

At Theano’s age in Greece, girls compete in ball, hoop, club and no apparatus.   This will be her 4th year competing.  Last year, her team placed second at the Northern Greece Finals and this year she will be competing again at the Northern Greece Finals. Budapest was the first time she participated at an international meet, where she placed second for no apparatus and fifth all around.

Part of RG is ballet, which Theano loves.  Excitingly, this year was her first on pointe and in January she auditioned by DVD for several Ballet Summer Intensives in the USA. The Bolshoi Ballet Academy in Connecticut and the Chautauqua Dance program in New York accepted her and she was waitlisted at the American Ballet Theater in NYC.  She will be attending the Bolshoi Ballet Academy for three weeks as soon as school ends in June.

Theano trains 4-5 hours / 6 times a weeks and only gets one month off during the summer. Three times a week she doesn’t get home until 11 o’clock at night and on Fridays it is just enough time to get some sleep and roll out of bed to go straight to practice again.

Training is so intensive for RG at a very young age that Theano takes it one step at a time. It is difficult for her to look too far ahead. Like every girl doing rhythmic gymnastics, she has the dream of being on the National Team of Greece.   However, she says that classical ballet and dance are also very viable career possibilities for her!

Importantly, she has the right attitude about the incredible number of hours that she devotes to training. Her motivation is “to have a good time.”  She loves being in the gym, loves her friends and team, her coaches and couldn’t imagine being anywhere else.  She also loves to compete and she is one of those kids who is never nervous for a competition.

Theano also loves music.  She has been playing the piano since she was five.  It is sometimes a challenge to find time to practice, but she still manages to pass all the exams every year at her conservatory and participate in concerts. Until last year,  she was also part of the choir at Megaro Mousikis of Thessaloniki, where she participated in many productions.