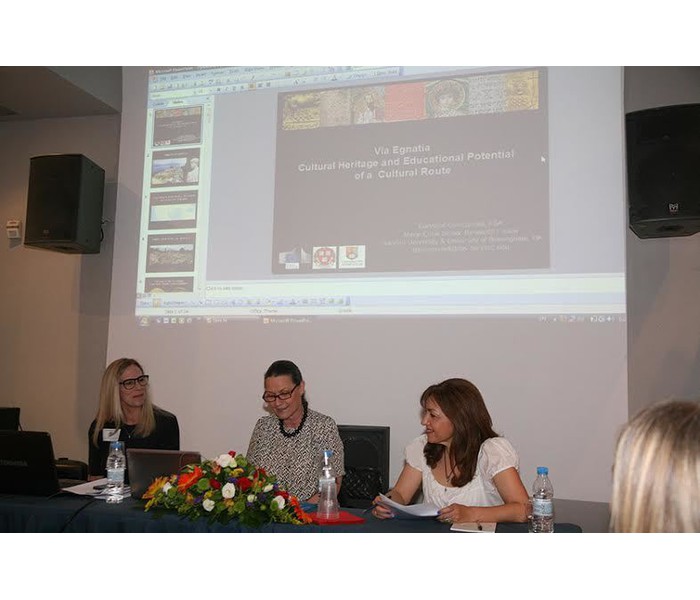 “Education, the Humanities and Cultural Heritage”
Our first Pinewood Scholars Series was a definite success. Six dynamic women, all members of the wider Pinewood community joined forces and through their presentations incited the members of our conference to think how important “Education, the Humanities and Cultural Heritage” are for our own lives and the Dr. Roxanne Giampapa is the Director of Pinewood American International School and a strong supporter of providing opportunities for scholarly dialogue to the Pinewood community. Thus, together with the vision of her colleague, Mrs. Amalia Spiliakou, the Pinewood Scholars Series has become a reality and the first year in what will be a long tradition of inviting our own Pinewood families and friends of the school to share their areas of expertise in a forum which allows for thought-provoking discourse, opens the mind to new ideas and brings together dynamic groups of people.

Dr. Elizabeth Duclos-Orsello,Ph.D., is a Fulbright Scholar, Greece 2015-16, and an Associate Professor of Interdisciplinary Studies and Director of American Studies in Salem State University (USA). In her talk Dr. Duclos-Orsello, encouraging the audience to participate answering questions, discussed the public value of the humanities and illustrated some of the many ways people might make use of the knowledge, skills and competencies of the humanities to ensure a strong future at the personal, local, national, and global levels. The audience was invited to consider the ways in which the humanities allow each of us to better understand and contribute to the world in which we live.

Dr. Eurydice Georganteli, Ph.D. is Marie Curie Senior Research Fellow, European Commission for Research and Innovation (2013-2016) at Harvard University and the University of Birmingham, UK, Keeper of Coins at the Barber Institute of Fine Arts and Lecturer in Numismatics at the University of Birmingham since 2000, and starting July 2016, she will be joining Harvard University as Lecturer on Byzantine Art and Architecture. In her talk Dr. Georganteli introduced the Via Egnatia as one of Europe’s longest, oldest and most significant cultural routes and explained its course in history. Egnatia’s priceless tangible and intangible heritage, shared between Greece, Turkey, the Former Yugoslav Republic of Macedonia and Albania, concluded Dr. Georgnteli, needs to be part of European heritage education, so that regional and inter-regional research initiatives and study programs could materialize.

Mrs. Maria Koloni is Academic Head of the EUphoria Project and a Museologist/Museum Educator with the Thessaloniki Cinema Museum. Twice this year Mrs. Koloni captivated our students’ attention as she unfolded for them the very first steps of cinematography. As Academic Head of EUforia, a wonderful European Community program on creating a student Documentary, Mrs. Koloni explained all parameters of the Program our Pinewood Grade 6 students are so excited to participate.

Mrs. Amalia Spiliakou is an Art Historian and Pinewood’s Host Country Studies Coordinator since 1996. Her Interdisciplinary Pinewood courses touch upon various aspects of the Humanities and focus on Greek cultural heritage. A strong advocate of “The Pinewood Scholars Series,” Mrs. Spiliakou presided at the Conference session. Introducing the speakers, she explained how both speakers influenced her teaching content/methodology, presenting as lovely proof, examples of Pinewood student work.