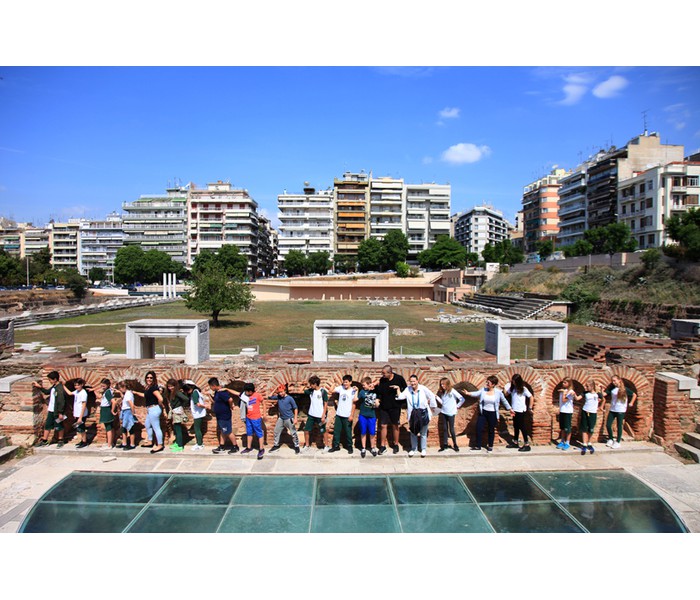 Visiting the Ancient Agora of Thessaloniki with Pinewood Grade 6 students was like taking a trip back to history, like reviewing important historical events of times gone by and learning from architectural monuments of great significance.

The Agora Complex of Thessaloniki constituted the economic, political, social and religious center of the city for many years. It was laid out during the 3rd century AD, and despite various newer constructions and changes during the early Christian period, it remained the main social center of the city until the 7th century AD.

The Agora was arranged around a rectangular stone-paved square of significant dimensions, with a length of 146m and a width of 97m. There were stoas on three sides, each of which consisted of a double row of columns and provided direct access to an area of public buildings like the well-reconstructed Odeon and the Hellenistic Vallaneio. The southern stoa stood on a vaulted substructure (cryptoporticus) – a double arcade which lay partly underground, making use of the natural slope of the land. The Cryptoporticus is now used as an educational Museum dedicated to the Ancient Greco-Roman Monuments of the city and finds from the excavations in the Agora.

Part of the Egnatia street entrance to the Ancient Agora was embellished by an impressive portico with a two-sided Caryatids colonnade, which the Thessalonians called “Μαγεμένες, Incantadas, or Charmed”. On November 4, 1864, the statues were removed by the French historian Emmanuel Miller and transported to France, where they have since been part of the Louvre collection. Las Incantadas, named thus by the city’s prominent Sephardic Jew community, depicted Dionysus, Ariadne, Leda, Ganymede, one of the Dioscuri, the Aura, a Maenad, and Goddess Victory. Numerous stories and legends have traditionally surrounded the 2nd century BC sculptures. Before their removal, they had been the symbol of the city, and only after 1864 did the White Tower rise to prominence as Thessaloniki’s symbol.