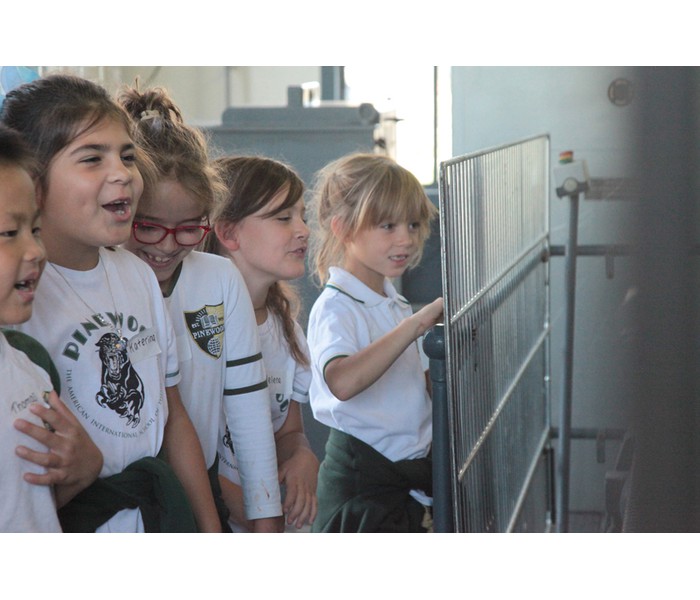 The Walls of the city, churches, monasteries and a Byzantine bath, are included in the UNESCO list. They are all creations of unique architecture and rare religious art, necessary to be preserved in the historical memory of the entire humanity.

The city of Thessaloniki hosts some of the most remarkable museums of Greece, as well. On the 17th of October, Grade 2 Pinewood students visited one of them, the atmospheric Waterworks Museum, located at the Sfageia Area of the city.

The Waterworks Museum of Thessaloniki, located in the original historic building complex of the old Central Pumping Station of the city, takes its visitors back to the late 19th century, when Belgian engineers constructed the city’s water supply network

The museum is open for the public since 2001 and features four visiting areas:

1.         The main building of the old Pumping Station, where visitors have the chance to admire the electric power generation equipment and the large pumping stations that were supplying with water the entire city of Thessaloniki until 1978.

3.         The Administration building, where a specialized library on water and hydraulic works is provided, along with old photographs, historic maps and projects regarding the water works of the 19th and the 20th century.

4.         And finally, the Water Park, where historical pumping stations and water pipelines adorn the outdoor areas of the Waterworks Museum.

With the help of two amazing Educators our students, aware of the Museums goal, the importance of the water as a natural source, had a wonderful time learning how a simple commodity like water can be part of a city’s Heritage.