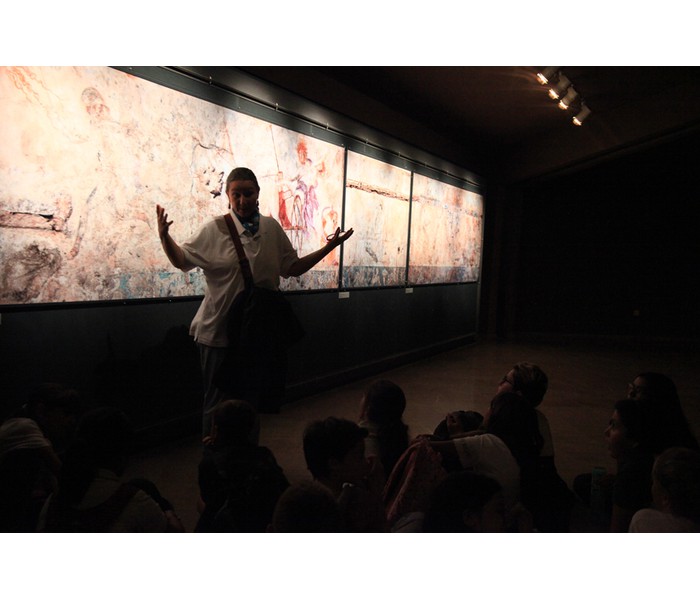 The first capital of the Macedonians was Aigai (present-day Vergina), a city founded sometimes during the turn of the 1st millennium BC.

Pinewood Elementary School students visited the Tomb of Philip II, one of the largest of all “Macedonian” Tombs found in Greece. The monument was constructed of stone and consists of two vaulted rooms, the main burial chamber and the antechamber. The grandiose, imposing facade is adorned with marble double doors, two half-columns and an extraordinary painted frieze immortalizing a hunt of lions, bears, antelopes and boars in a semi-forested landscape.

Next to Philip’s Tomb is the plundered cist tomb of Persephone famous for its wall painting. Among figures of the Fates and of Demeter seated on the “mirthless rock” is a depiction of the abduction of Persephone by the god of the underworld, Hades. The originality of execution, power of conception and restraint of colouring all indicate an artist of great talent. Could the artist be the Theban Nicomachus, famous for his rendering of the female figure?

Students enjoyed a day of myths, glorious history, fine arts, golden treasures, and … serene countryside, sunshine and autumn bliss. They were so smart but most importantly kind and full of respect…They were attentive and engaged, they contributed much to the successful outcome of our trip!

Many thanks to Pinewood’s Grade 5 Team, Ms. Erin Trotter and Ms. Sydney Heaivilin, and our School photographer Mr. Kosta Papantoniou for their much appreciated assistance!!!