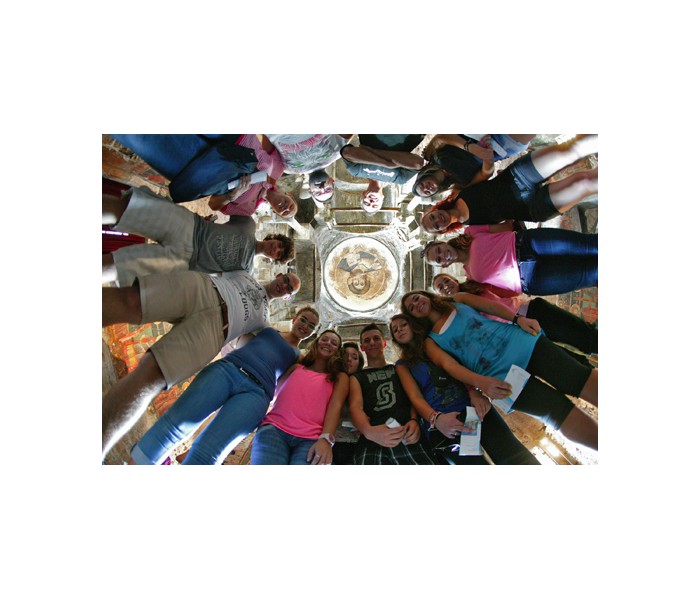 Lefkada is a mountainous island, covered with dense vegetation to the east and south. Its eastern coast slopes gently down to the sea, which is sheltered from the wind and dotted with thickly wooded islets. The west coast is steep, with a few spectacular stretches of endless golden beach. The capital of the island is also called Lefkada. A tranquil, picturesque town built on a natural harbour, it is composed of distinctive, multicolored wooden houses, whose upper floors are covered with sheet metal.

On our way to Lefkada we stopped at Arta, the capital of one of the four counties that make up the Epirus region of Greece, located on the banks of the river Arahthos. During the 13th and 14th century, Arta reached its highest moment in history when it became the capital of the Byzantine Despotate of Eprius. Arta is rich in museums and monuments. We visited the new Archaeological Museum, dedicated to the ancient city of Amvrakia that lies under modern Arta, the Church of Panagia Parigoritissa decorated with a magnificent dome mosaic of Pantokrator, and the historical 17th century Stone Bridge. According to a local tradition, whoever crosses this Bridge should cross it in silence as a tribute to the wife of the bridge’s Chief Engineer who killed herself so that the Bridge would stand forever, reversing a curse by turning it into a wish for generations to come.

Friday morning was sunny and bright, a perfect day for a cruise around the Ionian islands near Lefkada. We had a wonderful morning visiting Porto Katsiki, voted the best beach of Greece, and Fiskardo, the loveliest village of Kefalonia, the only village left untouched by the major earthquakes of 1953. For lunch we stopped at the small harbor of Frikes in Homeric Ithaca, and in the afternoon we visited the Papanikolis Cave of Meganisi, Scorpios Island, owned by the Onassis family, and the small island of Madouri, owned by the Valaoritis family. The day was full of magnificent pictures and rich in experiences.

The day was dedicated to the Island of Lefkada. We first visited the mountain village of Karya at an altitude of about 800 meters and in the middle of a forest of plane and birch trees. Karya is the center of the “karsanika” embroidery-making tradition of Lefkada, and the “Maria Koutsohero Ethnological Museum,” a small but wonderful museum dedicated to this difficult embroidery technique.  Mr Katopodis, the Museum’s director, guided us around the Museum with enthusiasm and genuine passion.

Lefkada city is a true Ionian capital and we spent the rest of the day exploring its many beauties. Late in the afternoon we went to Kathisma, a beautiful beach famous for the best sunsets in the Ionian Sea. We couldn’t miss it. The day ended in Porto Lygia, a small, picturesque harbor, eating “kalamarakia” right next to the sea.

On our return to Thessaloniki, we stopped at the village of Elliniko in Epirus to visit the “Theodoros Papagiannis” Museum of Contemporary Art. Theodoros Papagiannis is an internationally acclaimed artist and is a Professor of Sculpture at the Athens School of Fine Arts. Mr Papagiannis, visiting Elliniko at the time, took the time to meet with us and guide us around the Museum himself. It was an honour and a great experience we will never forget.

The Museum is housed in a fine school building, where Mr Papagiannis first learnt to read and write. In his own words “I could have offered these works to a more central museum in Athens or Ioannina, or anywhere else. But I believe that the best place is our village school. This is because the works which we exhibit directly concern this place. They were created by memories which have marked me and have kept me company throughout my life. They were created by powerful experiences which nourished my creativity. As I have written in an earlier text of mine: ‘They sprouted like shoots among whatever else had accumulated upon them’. Nothing from my subsequent service in the course of art could prevent them from making their presence felt.”