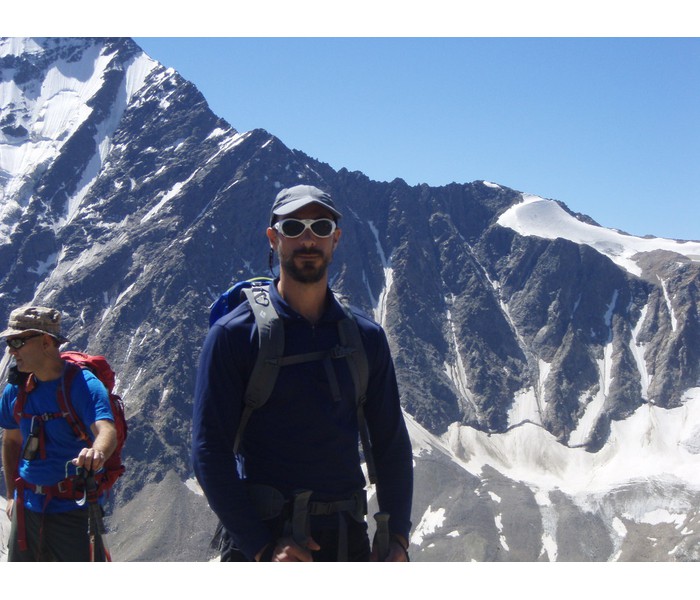 Our own Mr. Paschalidis, a member of the Club of Greek Alpinists of Thessaloniki, planned an expedition in August 2014 to the Elbrus Mountain, located in south Russia, between the Black and Caspian Seas. Elbrus is an inactive volcano on the side of the Caucasus ridge and is the highest mountain in Europe with a height of 5642m. The name of the mountain is derived from the Persian name, Alborz, but was known also to the ancient Greeks under the name Strovilos and was the mountain where, according to Greek mythology, Zeus chained Prometheus.

The ascent of high mountains requires not only a very good physical condition, but also very detailed planning about equipment and supplies and the daily program, because mistakes usually are not excused on the mountain. The main difficulties that mountaineers face are harsh weather conditions (low temperatures, strong winds, fog, snowfall and increased ultraviolet radiation), extreme dehydration, exhaustion and hypoxia (altitude disease).

For these reasons, Mr. Paschalidis’ team followed a very specific plan for the ascent. After their arrival, they settled at an altitude of 2000m. Their routine included acclimatization to the altitude and physical preparation for the challenge of the ascent by consuming huge amounts of fatty foods every day! He estimates his daily reception of calories to be about three times higher than normal. But the most important preparatory factor was the acclimatization to the high altitude – arguably the worst enemy of a mountaineer.

As we know, air is a gas mixture. One of its components is oxygen with a content of 21% by volume. Although this content remains the same at all altitudes, low pressure at high altitudes makes it feel like there is a lower percentage of oxygen. At 3700m (where their base camp was located) the air is like containing oxygen of 13% and at 5700m 10%. This means less than 50% in relation to the sea level. The human body responds to this hypoxic environment by producing more hemoglobin, a component in blood responsible for carrying oxygen to the tissues.

The modern process for acclimatization is to reach a higher altitude each day and then to return back instead of remaining higher, because this causes extra stress to the body. Progressively, the base settlement can change to higher altitudes. Therefore, for the next days they did ascents up to altitudes of 2400, 3400 and 3700m, before they settled themselves in the base camp at 3700m. This base camp consisted of a series of barrels in a line for accommodations and a container as a kitchen.

The acclimatization continued with ascents to 4200 and 4800m.

After they reached the base camp, they all suffered from hypoxia symptoms. Headache, nausea and vomiting, dizziness, upset stomach, feeling unsteady and shortness of breath forced them to limit and slow down their movements. Even when lying in sleeping bags they struggled with deep breaths for oxygen. According to the plan, three days after they reached the base camp, they would try the ascent to the summit, but weather turned very bad and changed their plans. Two days after their initially scheduled peak attack day, the weather forecast gave a small break of almost perfect weather conditions, which was translated by a cloudless sky, wind speed of 35 km/h and temperature of -13oC with a wind chill factor of -20oC. (Wind increases the rate at which a body loses heat, therefore on a windy day it feels cooler than the temperature indicated by a thermometer. This heat loss can be converted to an equivalent temperature). This was their last chance. Thus, the next morning at 2:00 a.m., they started the ascent in darkness with headlamps.

The beginning of the ascent on peak attack day

The dawn revealed a cloudless sky and a thrilling view of the Caucasus Ridge, which was a welcome counterbalance to the altitude disease that increased by each step.

About 8 hours later they were on the summit of Elbrus, taking photos and congratulating each other.

This expedition was something more than just an experience climbing a new mountain. It was a lesson in mental strength and cooperation with other people. All members of the team suffered under extreme physical stress. In some cases they had to pull a colleague with a rope or help another to stand again on his feet. But everyone made it and it was the spiritual strength that pushed everybody to continually do one more painful step to the top, just like it is with all major goals in life. The other thing Mr. Paschalidis learned is the importance of patience during his cohabitation with other people under difficult conditions. For the success of the team, everybody had to depress his egoism and respect and help other mates even if he felt uninspired to do so because of his own condition.