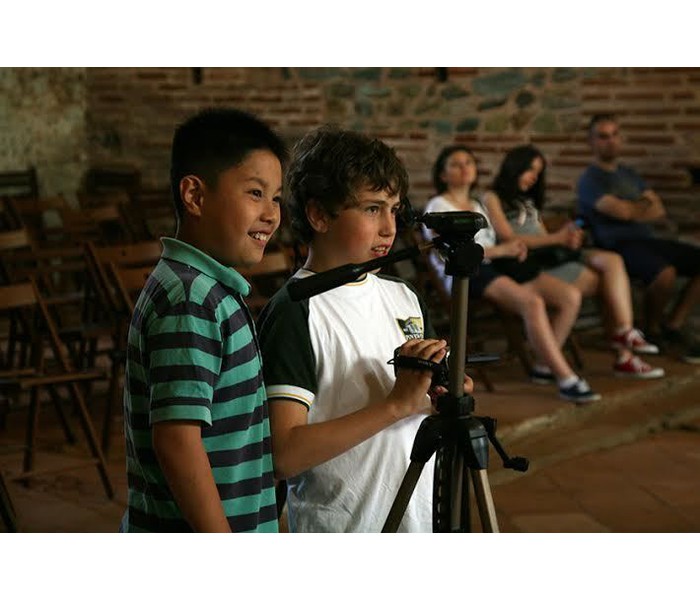 On Monday the 30th of May, our Grade 6 Social Studies students’ participation in the EUforia Programme, a transnational cultural partnership between Greece, Hungary and Poland, made possible through funding by European Commission’s MEDIA program, came to an end.

We visited the Rotunda, a Late Roman Temple/Mausoleum, part of the vast Galerian Palatial Complex, to film a Documentary about this magnificent building and do what our students were trained, at school, to do:

2. Explore the inherent strengths of the camera: closeness, showing rather than telling, shooting to edit.

Our students were well prepared. First they were filmed narrating the story of the Rotunda. Then, very professionally, they interviewed two eminent Byzantinologists, Mr. Rapti and Dr. Georganteli, visiting tourists and a local coffee shop owner. Finally, using the appropriate filming equipment, they became cameramen, film directors or audio experts.

Our Grade 6 documentary on the Rotunda will be presented in Thessaloniki’s International Film Festival, as part of its educational section.

On behalf of Pinewood, I would like to thank all EUforia members of the Thessaloniki Cinema Museum for inviting us to be part of this wonderful cinematographic trip. They were always near us for help and support.

A special thanks to all our interviewees, who took time to answer our students’ questions.

Last but not least, as Pinewood’s Grade 6 Social Studies/Host Country Studies teacher, I would like to thank my students for the hard work.

It was a wonderful learning experience,