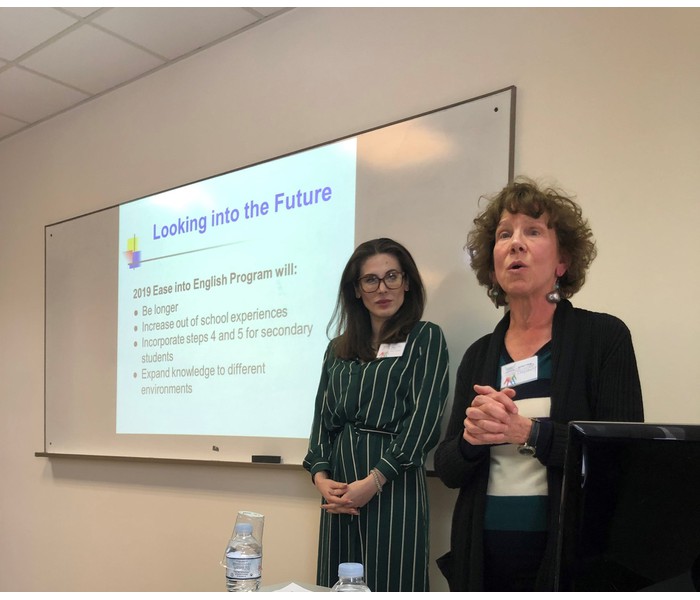 On February 23-24, 2019, five Pinewood faculty members gave professional talks at the TESOL Macedonia-Thrace 26th Annual International Conference, American College of Thessaloniki, which drew participants from several areas of Greece and also from many countries in the Balkans and Near East. The Pinewood faculty presentations all focused on the central conference theme, which was the development of classroom teaching practice with hands-on concrete experience as a central component of learning.

In the first session on Saturday morning, Feb. 23, Ms. Erin Trotter gave a talk entitled “Building language through STEAM,” in which she presented a multi-disciplinary thematic unit she created for Grade 5 students which builds skills in math, social studies, art and design through the medium of English. During her presentation, she also led the audience through various hands-on activities which students complete during the course of her unit.

In the second session on Saturday morning, Dr. Linda Manney and Ms. Alexandra Valtzidou presented their work on “Hands-on learning: building student language skills through action and reflection.” Their talk focused on the 2018 Pinewood Summer English Program, Ease Into English, which they designed as an English preparatory course for new Pinewood students. Dr. Manney briefly summarized principles of Experiential Education which shaped their program design, and illustrated tasks from a curricular unit on cooking and nutrition which they planned for all students in the program.  Ms. Valtzidou continued by describing another curricular unit based on Experiential Learning, a media project on superheroes, which she designed for younger children in the program.

On Sunday, February 24, Ms. Zoi Tsiviltidou and Ms. Helen Dalakas gave a presentation entitled “Raising cultural awareness: Food unites us all.”  Ms. Tsiviltidou began by summarizing key principles of intercultural communication which inform the curriculum of Secondary ESL courses designed by Ms. Dalakas.  Ms. Dalakas then described a multi-faceted project her students completed in celebration of World Food Day. Students had to research food and cooking from many cultures, find and prepare recipes, and work cooperatively with others to prepare a class recipe book which represents several diverse cultural traditions.

In sum, several Pinewood faculty are actively involved with teacher organizations who set high standards of classroom instruction in our professional community. The group represented Pinewood well, both locally and internationally, and they gratefully acknowledge the generous support from Pinewood Administration, which enabled their full participation in the conference.