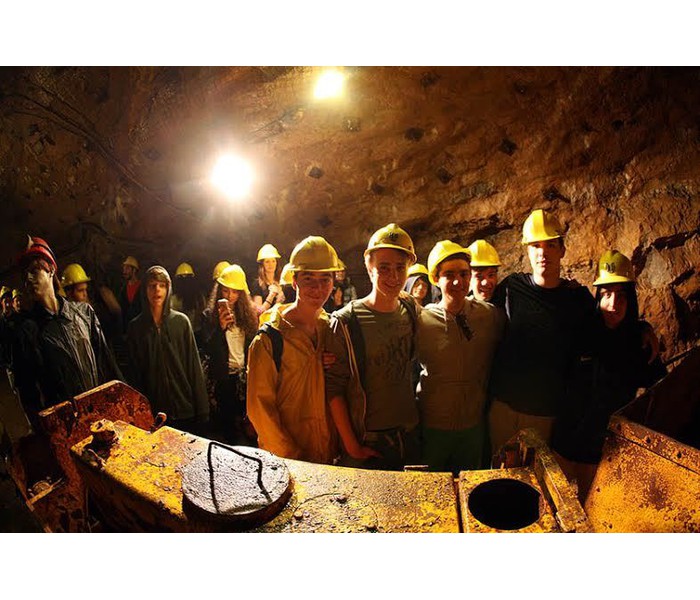 Many years back, Zeus, the formidable king of ancient Greek gods, released two eagles in opposite directions.  They met in the sky above Delphi, marking the area as  the center of the world. Our trip to Delphi was so full and culturally rich, it was like visiting, in just three days, paradise.

A Pinewood trip to Delphi is an opportunity to sink deep into Greek history, ancient, byzantine and modern. Visiting the Vagonetto Mining Park was a unique opportunity for our students to follow the lives of 20th century Greek miners and visit a real underground gallery. Almost 40 years ago, the mining gallery we visited was a working gallery, one of the first that opened for the underground mining of bauxite in the Ghiona area. Many years later, the area was reconstructed to host the only thematic park of its kind in Greece. It was a “chilling” experience going down the mine and be transported deep into the labyrinth like corridors where the miners.

Friday morning was dedicated to Delphi, its antiquities, and the Ideals it represents. We visited two important areas within the Delphi vicinity: The Delphi Archaeological site, and the Archaeological Museum. We started with the Archaeological site, all of us feeling like we were somewhere special. The path led us up higher and higher proceeding through a multitude of amazing ruins. The Treasury of the Athenians, the Polygonal Wall, the Temple of Apollo, the Theater and finally, for the more adventurous of us the beautifully well preserved Stadium. Delphi is set on the side of a mountain so the views from the ancient site were absolutely breathtaking.

The Archaeological Museum of Delphi shelters an amazing collection of masterpieces unearthed during excavations at the Delphi oracle and its vicinity. It is one of the top must-see museums in Greece, its permanent exhibitions covering over a thousand years, from the Mycenaean era to the Greco-Roman times. The beautiful “Charioteer” bid us goodbye.  Although victorious, he stands with admirable modesty and faces the crowd in total control of his emotions. When Nobel prized poet George Seferis saw the Charioteer, he wrote about “the motionless movement that takes your breath away.” We all felt the same.

The rest of the day was really unique as unique is the Greek countryside. We spent the afternoon exploring the most famous Parnassus mountain village of Arachova, we relaxed by the Hotel’s swimming pool and for dinner, we tasted good, traditional Greek food.

On our way back to Thessaloniki we visited the Monastery of Hosios Lukas, one of the finest Byzantine monuments in Greece. The Monastery, set on the western foothills of Mount Helikon is famous for its Katholikon (the main church of the Monastery) decorated with rare marble revetments and astonishing mosaics. We found, however, equally interesting and aesthetically appealing the cloisonne masonry of the smaller church of the Theotokos, the awe-inspiring view, and the hospitality of the people.