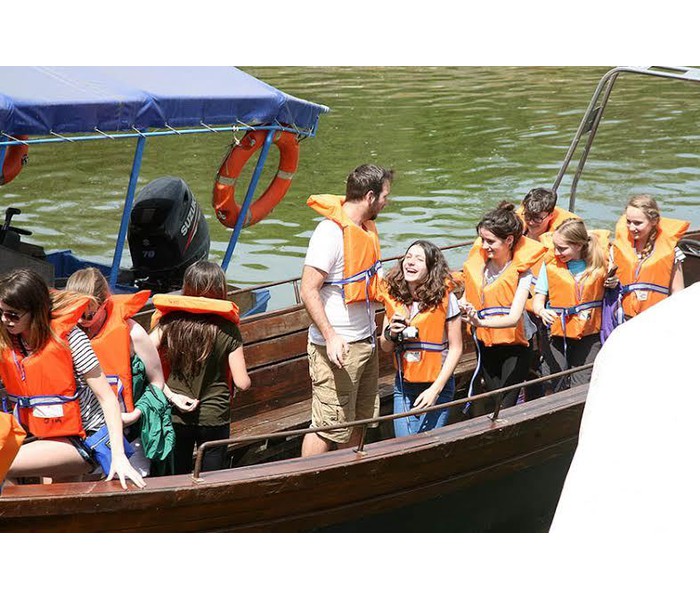 Tuesday, April 19
Back in the 19th century, Honore de Balzac questioned “What is art? Nature concentrated” after visiting Lake Kerkini, a unique wetland with amazing natural beauty, our students understood exactly what Honore de Balzac meant.
Tuesday was a day dedicated to a unique itinerary! We visited Lake Kerkini, an artificial reservoir that was first created in 1932, and then redeveloped in 1980, on the site of what was previously a particularly widespread marshland. Today Lake Kerkini is a unique wetland where 300 different species of birds, both rare and protected, find shelter. We enjoyed the beauty of this rare place by taking a long Birdwatching Boat Tour of the Lake. Our Tour Guides gave us some amazing information. Due to the great biological value of the Lake, in the area can be found more than 620 species of plants, 10 species of amphibians, more than 30 species of fishes and more than 120 species of butterflies! We reached with our boat the area of the Cormorants, we saw colonies of white Pelicans, great big Storks, and beautiful Herons, believed by the ancient Greeks to be messengers of Goddess Lunch was at the Oikoperiigites Center where our experts, Mrs Georgia Paliouris and Mr Yiannis Reklos, shared with us valuable information on Lake Kerkini. Our day ended in Kavala, in the roof-garden of Galaxy Hotel, enjoying a magnificent sunset!

Wednesday, April 20
Plutarch famously reported that Brutus experienced a vision of a ghost a few months before the battle of Philippi. One night he saw a huge and shadowy form appearing in front of him; when he calmly asked, “What and whence art thou?” it answered
“Thy evil spirit, Brutus: I shall see thee at Philippi.” He again met the ghost the night before the battle. This episode is one of the most famous in Shakespeare’s play Julius Caesar.
Philippi is an important archaeological site to visit. First, the Thasians colonized the area in 360 BC, and named it Krinides. Then, King Philip II of Macedonia, realizing its economic and strategic potential, conquered, fortified, and renamed the city after himself. The construction of the Via Egnatia through the city in the 2nd century BC made Philippi an important Roman regional center. The dramatic battle of Philippi, however, back in 42 BC, turned the city into a financial, administrative, and artistic center of even greater importance. Another important event marked the city’s history a century later. Saint Paul founded the first Christian Church on European soil at Philippi in 49/50 AD. The establishment of the new religion and the city’s proximity to Constantinople, the Roman Empire’s new capital, brought even new splendor and significance. Three magnificent basilicas and the Octagon complex, the cathedral dedicated to Saint Paul, were erected in the city center in the fourth-sixth centuries AD.
Our students were guided around the city, viewing Hellenistic, Roman and Christian antiquities, discussing the role of the Roman Forum, the importance of Via Egnatia, and the developments in Early Christian Architecture.