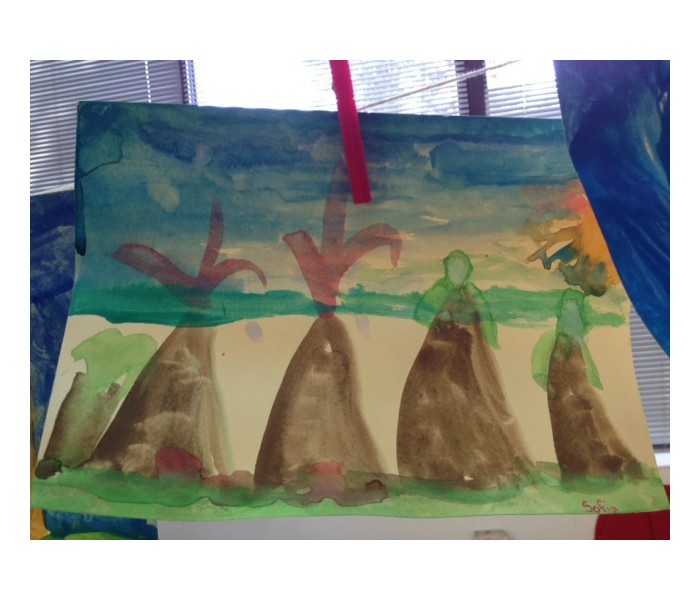 Pre K1 began the new year by looking at the weather. So far they haven’t had any snow but that didn’t stop them. Shaving cream became the softest snow of all and the children had great fun enjoying the texture of pretend snow whilst finger painting. The North wind did blow and the children ran around the playground with their weather centers.

This week Pre-K 2 has been learning all about our planet Earth and its various geographical features such as mountains, oceans, rivers, lakes and our favourite – volcanoes! We have talked about the fact that only our diverse planet provides the necessary conditions to sustain human, animal and plant life, and looked at the composition of the Earth from within – the inner and outer core, the mantle and the crust. The children have been busy colouring, painting and labeling, from watercolour landscapes to diagrams of volcanoes, and they have spent the week marking various geographical features on their world maps.

All those in the Pre-K 2 vicinity should be on the lookout as the countdown begins to our very own volcanic eruption. Watch out for spewing lava, molten rock and bits of rubble flying about (with a hint of vinegar, baking soda and a papier mache construction)!

Kindergarten Comets are zipping through space this month.  The students have begun their space adventures, learning about the solar system.  After learning facts about the moon, the students drew the various phases of the moonn and then followed the night sky to record 10 days of Moon phases in their calendars.  Although we all would have loved to go to the moon and see it up close, we  had to settle for eating it instead!  See how we carved away at our OREO COOKIE centers to show the moon’s phases. Yummy moons and a cup of our milky white galaxy!!  SCHOOL IS COOL!